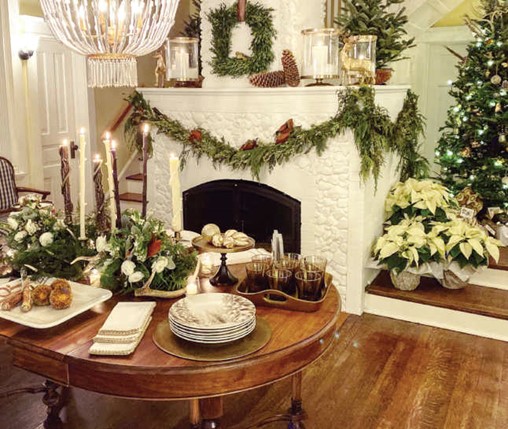 One of the best ways to gather ideas for holiday decorating is to get a glimpse of how other people infuse their homes with the spirit of the season. Lake Bluff History Museum’s Holiday Home Tour is just the thing. This year’s tour on Sunday, December 4, includes a record number of homes decked out for the holidays in ways that will inspire and delight. The tour captures the charm of Lake Bluff and showcases the diversity of the village’s housing stock. Each house has a story to tell, both in its current design, holiday décor, and historical significance. It includes two late 19th century cottages built when Lake Bluff was a summer resort. One went up in 1890 in an area that became known as the Artists Colony, as it was home to intellectuals and avant-garde writers, poets, and artists. The other was built in 1893 on a parcel that has a long history of notable owners, starting with the area’s first homesteaders in the 1830s, the Lake Bluff Camp Meeting Association in the 1870s, and early Lake Bluff Village President William F. Cochran and his wife, Ella—who in 1893 built the Queen Anne-style house that’s standing there today. Their daughter Nell and her husband John Kreutzberg were the next residents, notable because John volunteered in World War I to drive an ambulance purchased by the residents of Lake Bluff for service on the battlefields of France. The French Government awarded him the Croix de Guerre medal, and the Chicago Tribune named Lake Bluff “America’s Most Patriotic Town.” Guests will enjoy visiting a Colonial Revival home built in 1900 and renovated many times. In the mid-20th century, it was home to a well-known policeman who, as a member of the village’s then three-man police force, was responsible for keeping teens out of mischief and home by curfew. Today the home is beautifully decorated in a rustic modern style, with a 21st century front porch, kitchen with wood beams on the ceiling and a powder room with shiplap walls. Another home is a Cape Cod built in 1938 nearly a decade after the lot’s previous house was mysteriously blown up, in a case never solved but long considered to have been mobster related. Completely unrelated to mobsters is the current owner’s collection of Santa figures and the display of her needlepoint artistry. More holiday decorations can be enjoyed at two post-World War II homes built to meet the housing demands of returning World War II veterans and their growing families. One of these is a traditional Ranch, still beautifully proportioned as a mid-century one-story in a neighborhood that has seen much new construction and many remodels. The other post-war house is in Lake Bluff’s first subdivision built for the Baby Boom. Originally a Ranch, the house has been expanded many times up to 2007 and is an excellent example of how village housing has evolved as family needs and changing styles have dictated. Visitors also will walk through a late 20th century Nantucket-style home filled with English antiques and vintage accessories. As befits such a setting, holiday decorations are traditional, with a Welsh cabinet filled with Christmas Spode and a Christmas tree displaying ornaments collected over 50 years. Lake Bluff History Museum has been hosting the Holiday Home Tour since 2010 to celebrate the season, showcase lovely architecture, and raise funds for its archives, programs, and exhibits. Guests are encouraged to make a day of it, as several businesses, cafes, and restaurants in Lake Bluff’s historic downtown will be open. The Museum also is offering two Holiday Boutiques in historic homes featuring a variety of home décor, jewelry, food, gifts, and more. The Lake Bluff History Museum Holiday Home Tour takes place on Sunday, December 4, from 11 am to 4 pm (last tour starts at 3 pm). The self-guided tour starts at the Museum at 127 E. Scranton Avenue, Lake Bluff. Tickets cost $50 and may be purchased at lakebluffhistory.org/events.