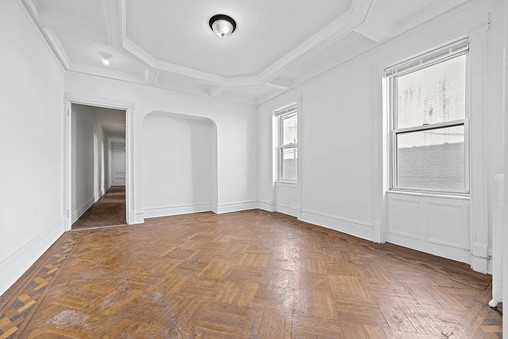 For an occupant who appreciates original details and has the means to renovate, this top-floor sponsor unit brimming with original features has a number of rare attributes and could make an exceptional home. On the plus side: Beaucoup original details, an unusually big footprint, two bathrooms, a top floor perch with three exposures and roof rights. OTOH, it’s a fourth-story walkup, and needs extensive renovation. It’s located at 563 8th Street in the Park Slope Historic District in a 1909 apartment house that is now an eight-unit co-op. Close to Prospect Park and part of a row of five, the building is a pale brick and limestone Beaux-Arts confection with two rounded bays and a rusticated stone base. Fripperies include exaggerated keystones, a dramatic entrance with Doric columns topped with giant dentils, an equally imposing cornice and stained glass. The unit opens to a foyer. Its seven rooms include a double parlor in front, two bedrooms large enough for queen beds in the middle and, bringing up the rear, dining room, kitchen and office. (The latter could also work as a third bedroom.) Plaster walls, high ceilings, moldings, paneling and picture rails are present throughout and, except for a few holes that need patching, appear in good condition. The spacious double parlor has a three-window bay in the front as well as a fourth window opposite; a wide doorway separates the two rooms. The dining room is large and attractive with a coffered ceiling and a niche even though it no longer has its columned wood mantel, high wainscot and built-in sideboard, visible in an old listing for another unit. The parquet floors with inlaid borders are in need of repair and refinishing, including replacement in one bedroom and the office. The electrical and plumbing appear to need updating, as do the kitchen and bathrooms. There’s a lot to work with already, though, with original built-ins and a washer/dryer in the kitchen and an original sink, Edwardian wall tile and clawfoot tub in the main bathroom. The latter appears to have a rigid asbestos tile floor, which could be replaced by period-appropriate hex tile or covered with Marmoleum. The smaller bathroom has space to add a sink and shower, as other units in the building have done. The unit has four closets, and there is room for more in the dining room, a bedroom and the office. Additional caged storage and bike storage is available in the building. The monthly maintenance is $1,020. Listed by Elizabeth Kohen of Garfield Realty Corp., the apartment is asking $1.225 million. What do you think?