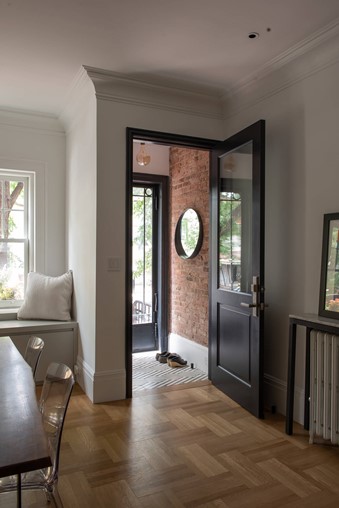 Got a project to propose for The Insider? Contact Cara at caramia447 [at] gmail [dot] com When architect Luca Farinelli of Manhattan-based BLD LAB Architecture first saw the exceptionally narrow four-story townhouse he was charged with renovating, one of a row of five designed by architect William B. Tubby and built in 1894, “it seemed sturdy and not in desperate need of being redone,” he recalled. But he soon realized why its owner of three years, a physician and mother of two teenage sons, who occupied the upper triplex and rented out the garden unit, wanted so badly to make the place more livable for her family and generally freshen things up. The previous owner, a developer, had blown out the back wall and added a kitchen extension at the rear of the parlor floor, but apparently hadn’t thought about changing the rest of the layout. A wall separating the entry from the front room made the front parlor so narrow as to be unusable. “It had very little function,” Farinelli said. “You couldn’t fit a sofa. It made no sense for today’s living.” Beyond that, he said, “Nothing was crisp, everything felt aged and like it hadn’t been cared for.” By removing that front hall partition, BLD LAB instantly made the room four feet wider. The firm went on to widen the openings and eliminate all the drops and archways between the parlor-level spaces — the front room, the middle section around the staircase, and the living room and kitchen at the rear. “The ceiling becomes continuous, though there’s still some wall for delineation between rooms,” Farinelli said. “That was quite a moment, when we saw how much more light flowed through.” The renovation focused on the parlor floor, which was nearly gutted. Though the house was essentially sound, joists had sagged. BLD LAB sistered them all to level the ceiling and removed old gas pipes threaded throughout. They found space for a powder room and coat closet, upgraded finishes and appliances in the kitchen and added custom storage, recessed lighting and new wood floors laid in what the architect called a modern herringbone pattern. They also created substantial new baseboards and moldings, painted the entire place a high-contrast palette of Farrow & Ball black and white, and added some particular details to suit the family’s lifestyle, including a kitchen island for casual meals and built-in crates under a desk tucked beneath the staircase for the two resident dogs. Exposed brick in the entry vestibule with a matte seal creates “a very warm transition between city and house,” the architect said. The formerly solid inner door got a new pane of glass to admit light. The house’s black and white scheme begins here with new cement floor tiles. A new window seat in the front parlor, which is used as a dining room, serves as both seating and storage. A striking dark paint job emphasizes the sculptural quality of the central stair. An original skylight brings light all the way down to the parlor level. BLD LAB removed an existing railing along the bottom three steps to open up the space. Photo by Alan Tansey A new powder room and coat closet sit opposite the staircase. Photo by Alan Tansey BLD LAB removed closets on either side of the rear fireplace that made the space feel cramped, as well as a mantel that was not original and “nothing special,” Farinelli said. “We simplified it and exposed the brick above for texture.” The kitchen is in an extension added by the previous owner. BLD LAB added new custom millwork of lacquered wood, including a bank of full-height cabinetry along one wall. Photo by Alan Tansey New installations include countertops and a backsplash of light gray marble, a peninsula counter for family meals and a new Thermador range. The refrigerator and a coffee station are concealed within the wall of new cabinetry. [Photos via BLD LAB Architecture, unless otherwise noted] Related Stories The Insider is Brownstoner’s weekly in-depth look at a notable renovation and/or interior design project by design journalist Cara Greenberg. Find it here every Thursday morning.