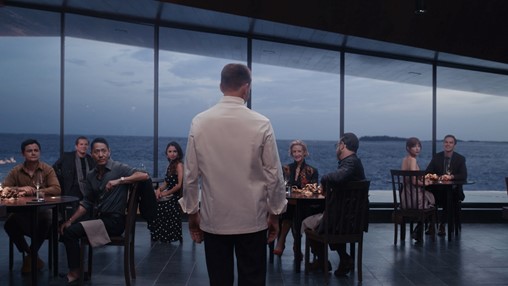 The food industry is absolutely skewered in The Menu, the new thriller from Succession director Mark Mylod. The film sets its sights on the world of fine dining by focusing on a destination restaurant somewhere in the Pacific Northwest that becomes the site of satirical horrors. The island-bound establishment called Hawthorn is so integral to the story that production designer Ethan Tobman designed and built it almost in its entirety in Savannah, Georgia. The majority of the film’s action, which follows a group of diners as they indulge in an increasingly chaotic tasting menu from Chef Slowik (Ralph Fiennes), takes place within the walls of the dining room and kitchen. “I always joke about this because it was similar to when I designed the movie Room, which has such an iconic, singular set that you’re stuck inside,” Tobman tells AD. “It’s similar in some narrative ways to The Menu.” The script gave only one sentence of direction for how the restaurant should look: austere, vaguely Scandinavian, cold. “I immediately had some ideas for how I wanted to design it. I walked into the first meeting with maybe 15 reference photos and they all ended up in the movie.” Those reference photos included paintings by Francis Bacon and John Currin, which are “studies in grotesquery, excess, and worship,” as well as images from episodes of Netflix’s Chef’s Table. Once Tobman realized that most restaurants are relatively bland in style, and that the interior design comes second to the food, he began expanding his references. He looked at synagogues and churches, particularly the modern ones from ’60s brutalism, and even incorporated a cross into the architecture of the kitchen’s back wall to amplify the feeling that Slowik is being deified. The chef’s aloof, arrogant persona is apparent in all of the design, which is relatively stark. “We wanted it to feel like Chef took the elements of the island into his construction of the space,” Tobman says. “So every material that you see in that restaurant, theoretically, he has harvested from the natural resources of the island, just the way he supposedly does in all of his food. The problem with Slowik is he's so fascistic in his approach to controlling the elements that he has twisted and bent nature to the point where he’s perverted it.” In the end, there’s no semblance of the island in the restaurant. It’s become cold, asymmetrical, and uncomfortable while retaining a distant sense of perfection. As the team constructed the exterior of Hawthorn on location on Hampton Island, Georgia, and the interior on a soundstage, Tobman wanted to bring in elements of real-world restaurants. Hints of now-closed Swedish restaurant Fäviken, Catalonian restaurant El Bulli, Sonoma, California, restaurant French Laundry, Chicago’s Alinea, and Copenhagen restaurant Noma can be seen throughout Hawthorn. El Bulli’s famed backlit spice rack was recreated in great detail, while French Laundry’s garden inspired the kitchen garden. Tobman also worked closely with Dominique Crenn, the three-Michelin-starred chef of San Francisco restaurant Atelier Crenn, who was a consultant on the film. In speaking with Crenn and her team, it quickly became apparent that the Hawthorn kitchen had to actually function for the film’s action to feel seamless and authentic. Tobman purchased working kitchen appliances for the interior set build and acquired a custom-built open-flame stove from Savannah company Grills by Demant after seeing a similar one in local restaurant Common Thread. Although the kitchen is slightly larger than a typical restaurant kitchen, it is notably realistic. Our bad! It looks like we're experiencing playback issues. Crenn was so impressed with Tobman’s set design, in fact, that she hired him to redesign Atelier Crenn, which is expected to open at the end of January. “It’s a real ‘art imitates life imitates art’ story,” Tobman says. “But if I can get a table now and then, it might be worth it..”