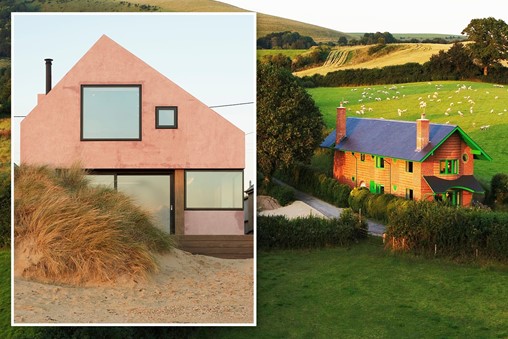 GRAND Designs House of the Year fans have slammed the first two homes battling to win this year's grand prize. Viewers were less than impressed with the first two properties on the "absurd shortlist", arguing they're not much more than "a holiday home" and "a monstrosity". A red brick house with a green frame has been slammed onlineCredit: Channel 4 The award is touted to celebrate excellence and innovation but some didn't think these two had what it takesCredit: Channel 4 A 'pink fondant fancy' in East Sussex didn't win the hearts of fans at homeCredit: Channel 4 Disgruntled viewers at home wanted to see more eco-conscious optionsCredit: Channel 4 The two homes in this year's final are Sea Breeze, described as a "pink fondant fancy" in East Sussex, and Red House, a red-bricked family home with bright green frame in Dorset. Over the four-week series, seven houses are shortlisted for the award before the winner is announced in the final episode. Grand Design House of the Year deems a winner for the best example of a one-off house designed by an architect in the UK. The award is touted to celebrate excellence and innovation in home design. READ MORE TV NEWS ANTI-MATT? I’m A Celeb fans reveal theory that Ant & Dec are furious about Matt Hancock JUNGLE GRUMBLE Boy George told to 'shut up' by I'm A Celeb viewers as he slams Matt Hancock But viewers have taken to Twitter to criticise the judging panel from the Royal Institute of British Architects, saying the homes don't have what it takes. One person said: "The two worst houses are put through. Absurd decisions #houseoftheyear." Another wrote: "Where are the heat pumps, the solar PV, the renewables. What are the u-values?" Someone else said: "Mainstream #architecture still mystifies me. A concrete house on a beach with no road and a garish brick home have made it though in #houseoftheyear. Most read in The Sun JUNGLE SHOCK I’m A Celeb’s first evicted camp mate ‘revealed’ ALL CHANGE Autumn Statement winners and losers - how it will affect you explained BANKING ON IT Millions on benefits and Universal Credit will get new one-off £900 payment BEACH TREAT I'm A Celeb's Matt Hancock, Jill Scott and Sue Cleaver enjoy surf-and-turf BBQ "This is not a good advert for what we should be building." One perplexed fan wrote: "#Houseoftheyear already off to a mysitifying start. Picked the beach box that was pretty much the same as the ones next to it and the god awful red house." Some pointed out that one of the properties served as a holiday home, debating it's "not a home" at all. An annoyed viewer said: "Good old RIBA selecting a holiday home (not a home) and a monstrosity (and I like brick!)" Read More on The Sun ALL WEATHER READY Oodie fans scramble to get their hands on new outdoor hooded blanket PARKED OFF I use bags of rubble to stop neighbours taking my parking space – they hate it Judging is conducted by the Royal Institute of British Architects (RIBA) - a professional body for architects who are primarily in the UK. The 20 projects competing to be crowned RIBA House of the Year will be featured on Channel 4's Grand Designs: House of the Year from November 16.