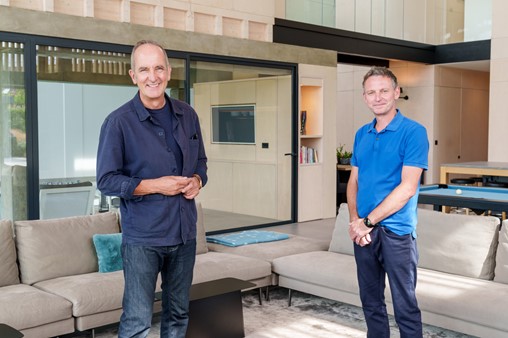 GRAND Designs returns to our screens to find the best architecturally designed property in Britain. Hosted by Kevin McCloud, here's everything you need to know. Kevin McCloud is on the hunt to find Britain's best homeCredit: Channel 4 What is Grand Designs: House of the Year? The 20 projects competing to be crowned RIBA House of the Year will be featured on Channel 4's Grand Designs: House of the Year. Grand Designs: House of the Year awards the best example of a one-off house designed by an architect in the UK. The award celebrates excellence and innovation in home design. Over the four-week series, seven houses will be shortlisted for the award and the winner will be announced in the final episode. Episode one kicks off on Wednesday, November 16, 2022. Read More on Grand Designs STUNNING Grand Designs couple spend 21 years transforming home called 'best ever' by fans TAKING A POUNDING My £10m Grand Designs disaster is not over yet… I could end up with £1 Who are the judges on House of the Year? The expert jury members are tasked with selecting the RIBA House of the Year 2022. The five members include: Taro Tsuruta (Chair) Taro Tsuruta studied and trained in both Japan and the UK before setting up his own studio in London. His work is frequently published and it has received a number of industry awards, most recently the RIBA National Award 2021. Alison Brooks Alison Brooks is one of the UK’s most highly awarded and internationally acclaimed architects. She has won over 70 awards for design achievement. latest on channel 4 RECORD A Place In The Sun's Jasmine Harman 'breaks records' as she bursts into tears stepping up Escape to the Chateau star reveals who will inherit famous Channel 4 home BACK ON THE MENU Here's who is on Steph's Packed Lunch today OFF COLOUR Bake Off fans concerned for Noel Fielding after 'worrying' appearance in finale Yinka Ilori Yinka Ilori is a multi-disciplinary artist and designer. He often uses the city as his canvas and encourages a sense of community by inviting the audience to engage and participate in his work. Ben Ridley Ben Ridley founded Architecture for London in 2009. He has since gone on to design a number of widely published and award-winning projects. Nicola Tikari Nicola Tikari is the director and co-founder of the multi-disciplinary practice Tikari Works. The company was named Architect of the Year 2021 by Architects Journal. What is the Royal Institute of British Architects? The Royal Institute of British Architects (RIBA) is a professional body for architects who are primarily in the UK. Founded as the Institute of British Architects in London in 1834, the RIBA's headquarters remains in central London at 66 Portland Place which was opened by King George V and Queen Mary. The RIBA Library is one of the three largest architectural libraries in the world and the largest in Europe. Read More on The Sun XMAS CHEERS Martin Lewis reveals how to get £200 free cash for Christmas & top gifting tips NEW LOOK Big Brother's Lisa Appleton looks unrecognisable as she goes glam for new career The institute also gives some of the oldest architectural awards in the world, including RIBA President's Medals Students Award, the Royal Gold Medal, and the Stirling Prize. It also manages RIBA Competitions, organising architectural and other design-related competitions.