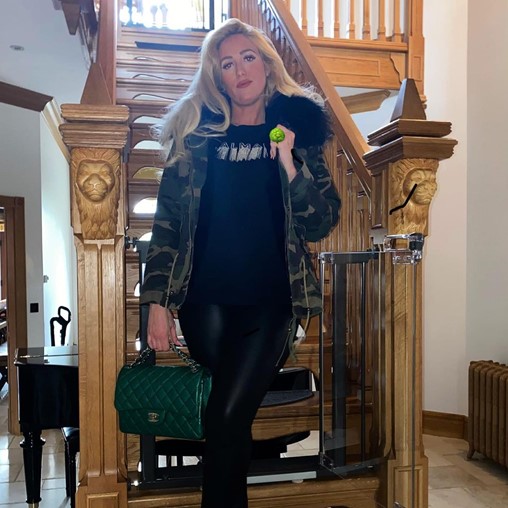 PARIS FURY has given fans a sneak peek of her immaculate kitchen inside her Morecambe mansion. Tyson and Paris Fury upgraded their £550,000 abode to a stunning £1.7million home in Morecambe in 2020 which they purchased through their firm Tyson Fury Ltd without needing a mortgage. Paris Fury shows off her immaculate kitchen on Instagram featuring crystal door knobs, lion carvings and red marbleCredit: Instagram The crystal door knobs match the incredible chandelier perfectlyCredit: Instagram @parisfury1 The lion motifs run throughout the house creating a dramatic entrance at the front of their homeCredit: Andy Kelvin / Kelvin Media Taking to social media, the mum-of-six, 32, shared a glimpse of her kitchen. Paris posed in her kitchen wearing a white crop top and red tracksuit bottoms and added the picture to her Instagram stories. The kitchen seems to follow the same interior design theme as the rest of her house, with dark wooden interiors and gold accents throughout. Lion heads have been carved into the wooden features - a signature Fury decoration. READ MORE ON PARIS FURY BARGAIN QUEEN Paris Fury's Xmas shopping with designer gear & goods from Home Bargains UPHOLDING TRADITIONS The five traveller traditions Paris & Tyson Fury stick to The top of the counters are made from unique red marble and lighter marble is used for the tiles on the floor. Each cupboard has raw wood finishings to create a 'country home' aesthetic and is finished with crystal door knobs to match the giant chandelier that sits in the centre of the room. In the background, you can clearly see the mum's large slow cooker on the side next to her white Channel handbag. Paris often shares snaps on Instagram of the different rooms in their mansion while she is dressed head-to-toe in designer looks, and the mixture of gold, dark wood, and lions seems to run throughout the house. Most read in Celebrity 'THAT IS THAT' 'No chance' for Prince Andrew return as King Charles makes crucial decision RICH LIST From Mark Wright to Cara Delevingne, celebs raking it in from property portfolios MEG'S MESSAGE Meghan Markle reveals close pal's words of warning before wedding to Harry PEOPLE'S PRINCESS Kate's just like Di - wearing her iconic earrings for Remembrance Sunday One photo showed the mum-of-six standing at the bottom of her wooden staircase which has lion heads carved into the newels for a dramatic look. In another Instagram picture, Paris stood underneath her staircase which featured a grand black piano. As if a grand piano wasn't enough of a statement, it also featured a gold radiator and statement floor-to-ceiling mirror. Another picture revealed Paris clutching a Channel handbag and standing in front of a set of ornate gold curtains. A snap of the entire family together showed them standing in front of a delicately carved white fireplace finished with a gold carpet and matching curtains. Paris told the Sun that her favourite spot in the lavish home based in Lancashire was her walk-in wardrobe. "Having this walk-in wardrobe was a big dream of mine. I got it and I do appreciate it," she said. The land the mansion is on was a plot for a static caravan-style bungalow, but the previous owners demolished it to make way for a stone-clad palace - complete with a water fountain on the driveway. Read More on The Sun MAE-BY BABY Pregnant Molly Mae reveals her and Tommy Fury's baby boy name DOUBLE YOUR MONEY Squeezed Brits in line for up to £1,100 boost under Sunak Budget plan In terms of security, the property has a castellated front wall, and a wrought-iron black and gold fence. Of course, the fence boasts its own lavish decor - with lion motifs similar to those found inside and four eagle sculptures on the gate posts. Lavish gold accessories are also a running theme as these ornate set of gold curtains showCredit: Instagram @parisfury1 Even under the stairs has been kitted out in a gold radiator and a grand black pianoCredit: Instagram @parisfury1 The family stands in front of an intricately carved fireplace surrounded by a gold carpet and matching curtainsCredit: Not known, clear with picture desk Even the newels on the staircase have lion heads carved into themCredit: Instagram @parisfury1