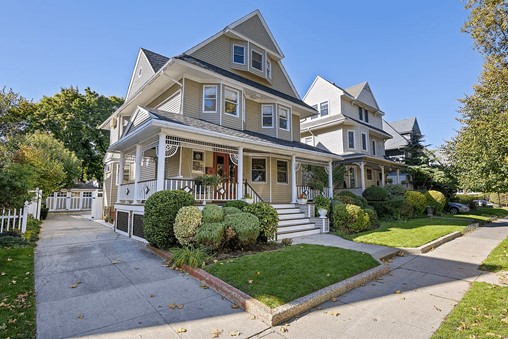 This sprawling Flatbush standalone certainly isn’t short on space, both indoors and out, with two floors of bedrooms and a two-car garage. The updated interior includes renovated bathrooms, but many period details in the house remain, including stained glass, mantels and wainscoting. The house at 296 Stratford Road is one of many constructed in the late 19th and early 20th century as residential enclaves were rising out the former farmland of Flatbush. The house was originally part of the Matthews Park development, although the name has largely disappeared. In a 1901 Brooklyn Citizen story on the new suburbs of Brooklyn, Matthews Park was described as an attractive settlement of more than 100 dwellings built on part of the former Henry G. Robinson estate. Construction began in the late 1890s, with the improvements under the management of “prominent businessmen of the Flatbush section.” One of those was builder John Parkin, and newspaper accounts show that No. 296, then known as 296 East 11th Street, was completed and sold in 1901. In 1907, the original owner advertised it for sale as a “fine built house” with 10 rooms, a bath and “all improvements.” It was last on the market in 2019, and the old listing shows that lots of wallpaper and carpeting have been removed and the bathrooms upgraded, but there weren’t any major changes to the layout. The generously sized main level includes a living room, den, dining room and kitchen. There are three bedrooms and two baths, one en suite, on the second floor. The third floor was opened to create a living room with another bedroom and a full bath. Period details on the main level include an entry with original stair, bench and stained glass windows, while the parlor has a columned mantel with original insert. Another mantel is in the dining room, which also has a plate rail and another stained glass window. The kitchen didn’t get an redo, and with four doors opening into the space it does have a challenging layout. As is, it has white cabinets, a peninsula with room for seating and tile on the walls and floor. Two of the house’s 3.5 baths are shown in the listing photos. Both have showers and cabinet vanities. The en suite bath is done up in black and white while the other has a wall of blue tile. A laundry room is in the finished basement and it has some bonus cabinet space and counters along with a sink and room for a second refrigerator. A deck off the kitchen leads to the rear yard, which has a bit of green space with the private driveway leading to the garage. There is an in-ground sprinkler system and the listing also notes that the house has a central vacuum. When it sold in 2019, before the renovation, it went for $1,912,500. Laura Rozos of Compass has the current listing and it is priced at $2.895 million. Worth the ask? Brooklyn in Your Inbox Subscribe to Brownstoner’s newsletter and stay up to date with more great news and articles like this one.