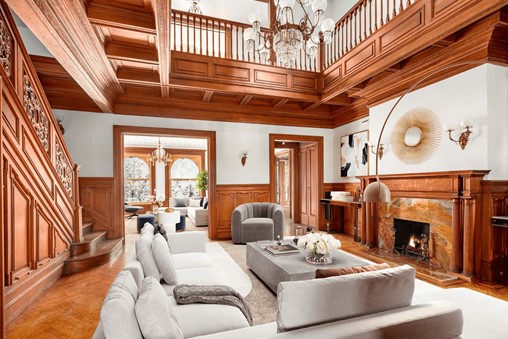 When this Park Slope manse was for sale in 1910 the ad pitched it as “must be seen to be appreciated” with exquisite details and an ideal location across from Prospect Park. The massive dwelling on Prospect Park West still has plenty of those original details in evidence, including a central gallery and gleaming woodwork. It has also had some modern and quirky upgrades; the “unequaled kitchen” described in the original ad has been turned into a 1950s diner. Known historically as 22 Prospect Park West the Neo-Classical limestone was designed by architect Montrose Morris for wine and liquor dealer Edward Lawton Syder and the fabulously named Mississippi Hudson Snyder. Plans were filed for the four-story house in October of 1899 with a construction estimate of $22,000. The couple wasn’t yet in residence by the 1900 census, but by 1902 they had moved to their new home. Mississippi didn’t have long in the house, she died in 1904. Edward was the one who took out the ad in 1910 to sell the home, boldly declaring it “unique and delightful” with an “unapproachably exquisite” dining room, spacious bedrooms, a house telephone system and servants quarters. Edward ultimately didn’t sell and his second wife Helena Day Lewis Snyder McGlone stayed in the house after his death in 1913. She was a frequent traveler, and contestant of wills, but kept the house as her home base through her third marriage and until her own death in 1939. Located in the Park Slope Historic District, the just under 25-foot wide limestone facade still has the details noted architect Morris designed for the Snyder family, incluing its triple arches at the entry, a balustraded balcony on the floor above and a red tile roof. LPC gave approval for facade work after a 2017 fire damaged the windows of the upper floors. While a 1944 I-card shows it was a rooming house for a period, in 1947 it was converted to a two-family dwelling with a doctor’s office on the garden level. That former doctor’s office is now the 1950s diner and the rest of the home is a generously-sized single-family with central air. The parlor and second floors are dedicated to main living spaces with a central parlor, multiple living rooms, dining room and a petite kitchen. The third floor can be used as a full floor suite with a walk-in closet, en suite bath, study and a second bathroom with just a tub. The top floor has three more bedrooms, a full bath and a media room with a kitchenette. The central gallery dominates the parlor floor as does the pristine woodwork, including wainscoting, a coffered ceiling and a stair with an Ionic-columned newel post and fretwork panels. The wainscoting continues into the dining room and the Ionic-columns are repeated on another mantel. There are six mantels total with the listing noting that there are gas fireplaces. The dining room is open to a curved breakfast nook and half wall partially conceals the kitchen. As noted, the larger kitchen is downstairs and with a turquoise banquette, black and white tile floor and bar seating it has possibilities for many a themed party or ice cream social. Outdoor space includes a roof deck with park views and a rear yard that is not shown, but according to the listing is “lush.” The house was on the market as a rental in 2016 for $25,000 a month and was listed for sale in April of this year at $12.2 million before dropping down to $10.695 million. Now listed with Tricia Tucker and Michelle Griffith of Douglas Elliman it is priced at $9.95 million. What do you think? Brooklyn in Your Inbox Subscribe to Brownstoner’s newsletter and stay up to date with more great news and articles like this one.