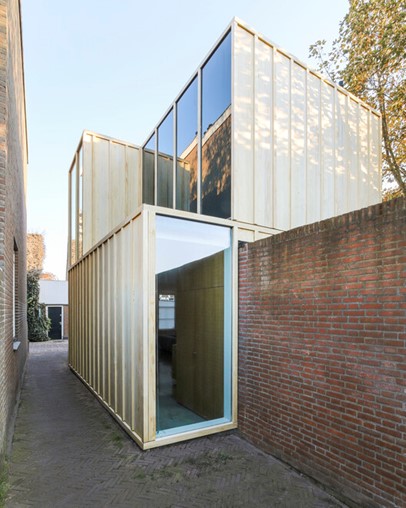 Text description provided by the architects. This is a house extension and renovation project in Scheveningen, the old fishers' town of Den Hague. The original house was tiny at best. It’s the last of a short row of small workers' houses, in a side street to Scheveningen-center. The occupants loved the city and the surf but really needed some more space. The extension more than doubles the original house and is like a little gem hidden in the alleyway. Because the fisherman’s house was part of a small row, we didn’t want the extension to alter the scale and ending defined by the side façade. So the addition was designed in maximal contrast to the existing house; in composition, material, and detailing. The façade-cladding on the other hand tabs into the surrounding by referring to the traditional cladding of planks with seems covered by small slats. This does have a twist, however; the slats are only used every other plank, as the planks are glued together (possibly because of the incredible qualities of Accoya wood). This makes the façade keep the middle between traditional façade cladding and interior cabinet masonry. This adds to the abstraction of the object, in contrast to the traditional fisherman’s house. The plot was shaped in such a way that it takes a strange ‘bite’ out of the alley next to it, which was awkward. But as we needed every m2, we decided to place window’s on the front and the back of the side extension, enabling pedestrians to see through the house, giving a little space back to the alleyway in a visual way. We placed the stairs in this part, ensuring that it would not be filled with furniture. Where the exterior shows a clear contrast, the interior was designed to maximize the spatiality; For one there are no visible transitions between the two parts in floor or ceiling. Secondly, the interior elements connect to the façade-openings, to create a maximum relation between inside and outside; embedding the house in its surroundings and extending its space beyond its small size. The interior is very clean in its lines and details, allowing the textures to come to the front. The concrete floor was left mostly unshielded during construction, to get the look of an older, used floor. The steel stairs were laser-cut from plate steel - based directly on our CAD drawings –, welded by the contractor on location, and conserved in bee-wax, to keep its natural rawness. The veneer of the cupboards is quarter sawn, as it is more abstract and emphasizes the unity of the wooden blocks.