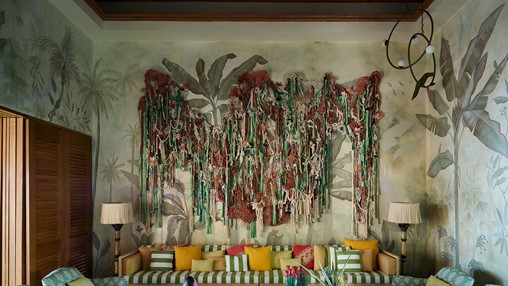 The whimsical getaway designed by RP Miller and Studio Antoine was reoriented toward its ocean views As its name implies, Hacienda Los Milagros is a haven of magic and wonder. Perched directly on the azure waters of the Bay of Banderas in Punta Mita, Mexico, the house synthesizes myriad narrative threads and cross-cultural influences, which collide and coalesce to exhilarating effect. The deftly layered decor speaks to Mexico’s ascendant status on the contemporary art-and-design scene; the enduring appeal of the country’s extraordinary craft traditions; the fusion of American and Mexican attitudes toward hospitality; and, perhaps, most of all, the power of place. At the end of the day, it’s also a pretty swell spot to sip a copita of mezcal while gazing out on a pristine stretch of the Pacific Ocean. Hacienda Los Milagros was built in the 1990s by Anne Marion, the late Texas-born heiress and philanthropist, and her husband, John L. Marion, the longtime chairman of Sotheby’s. Inveterate collectors, the Marions stocked the house with a king’s ransom in traditional Mexican art, furniture, and artifacts, some of which still remains on-site. When the home’s current owners—an enterprising American couple with two children—visited the property, they were understandably seduced by its privacy, lush vegetation, and proximity to the surfer-friendly beach. The house itself was a somewhat different matter. “I think the Marions cared more about their art than the views of the ocean. The house was well built, but everything was pretty dark,” the wife recalls. “It felt a bit like a Hollywood idea of an old-world hacienda, something you might find in Beverly Hills or Palm Beach. It was never going to be authentically Mexican, but we still wanted it to reflect the spirit and soul of Mexico. We decided the only way to go was whimsical, to embrace the vibrant color and culture of this place,” she adds. The homeowners engaged Mexico City–based designer Antoine Ratigan to give the estate a fresh, contemporary makeover, capitalizing on the structure’s underexploited connection to the sea and sky. “The spaces were very gracious, but the house felt stuck in the ’90s. We tried to bring it back to life by opening up views and ushering in lots of natural light,” Ratigan says of his assignment. His boldest move was the wholesale reinvention of the expansive courtyard, essentially making it an organic extension of the interiors, intimately tied to the social life of the home and the daily rituals of its inhabitants. Ratigan replaced an existing pavilion, which strangely blocked sight lines from the house to the pool and the beach beyond, with an open-sided, columned canopy perfect for alfresco repose. He also expanded the indoor-outdoor dining room, refashioned the pool and pool deck, overhauled cloistered balconies, and completely transformed the house’s many baths with a rainbow coalition of handmade tiles by Talavera de la Reyna—all in the service of amplifying the home’s vibe of sprightly sophistication and serious comfort. “The bones were mostly there. We just needed to dislocate a few and add a few new ones,” says the wife, who shepherded the renovation project with an obsessive focus on every minute detail. “Frankly, I was a pain in the ass, but I’m okay with that. My goal was to create a home that would evoke emotion and inspire our guests and our family. The story we were trying to tell had to feel authentic and true.” The final layer of artful ornamentation and decorative derring-do came courtesy of Rodman Primack (of AD100 firm RP Miller) and Rudy Weissenberg (Primack’s life partner and collaborator in Mexico City’s AGO Projects), who built upon Ratigan’s roster of artisan collaborators with special commissions and signature pieces by a broad range of contemporary Latin American designers and artists, including Weissenberg himself, Agnes Studio, Pedro y Juana, and Marcela Calderón. Weissenberg also enlisted tattoo artist Christian Castañeda (a.k.a. Xian of the Death) to develop a custom iconographic language that was translated into everything from bedding embroidery and stationery to the ceiling mural that crowns the bar. “There are moments that are incredibly rich with color, pattern, and texture, balanced with moments that are deliberately more spare, open, and meditative,” Primack says. “The individual artworks and objects are spectacular, but our work was most concerned with how people experience the house. Our clients are the most gracious hosts. They’ll have 14 friends for a yoga retreat. They surf and swim and make music on the stage in the theater. They pushed us to elevate every activity and movement that unfolds throughout the day.” For all the fanatical attention to form, flow, color, and material, the ultimate impression made by Hacienda Los Milagros is one of serenity and beauty. “People may not notice every single detail, but they certainly feel them,” the homeowner concludes. “To me, this house is a grande dame. We just tried to restore some of her grandeur.” This story appears in AD’s December 2022 issue. To see this Punta Mita estate in print, subscribe to AD.