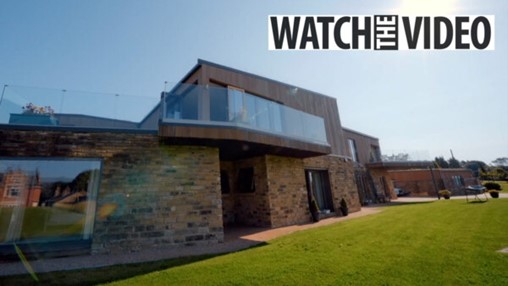 GRAND Designs fans have been blown away by a Bolton couple who have spent seven years creating their perfect home. Paul and Carol Rimmer invested all of their money into creating a fortified eco-home in the Pennine Moors, building a state-of-the-art property on a £350,000 budget. The couple welcomed Grand Designs back to see their finished home The stunning five-bedroom house is their piece of paradise The bricklayer has been working on the home for almost a decade with the help of his wife and Grand Designs host Kevin McCloud first visited the site in 2015. Now, seven years later, the pair have struggled financially as their efforts to keep the project running have racked up a £550,000 bill, way over their budget. However, it seems like it was worth it and in the latest revisiting episode on Channel 4, the house was finally finished. Paul and Carol are now looking forward to retirement in their lavish home surrounded by acres of land, free from complicated planning permission fights and building issues. Read More on Grand Designs stunning Grand Designs' £6m 'zig-zag' house dubbed 'breathtaking' by host Kevin McCloud TAKING A POUNDING My £10m Grand Designs disaster is not over yet… I could end up with £1 The pair made every effort to make it a zero-carbon home right on the green belt, using sustainable materials, solar panels, and specific building methods. They saved money on project managers and quantity surveyors by doing the work themselves. Further issues were caused by weather, with flooding threatening to stop the renovation in its tracks before it was completed. Paul also had a heart attack in 2020, needing surgery to fully recover. Thankfully the couple were able to pull through – with the eco-friendly building meaning the bills equate to that of "a small terraced house". Now they’re letting people join them in the giant property via AirBnB. While some previous builds like the infamous Lighthouse project saw viewers watch through their fingers as £10million was blown on the project, this story seemed to have a happy ending. Most read in TV VERTI-NO I’m A Celebrity star pulls out of terrifying first trial after last-minute panic CAN'T BE-LEETH IT Baywatch's Yasmine Bleeth, 54, looks unrecognisable in rare public outing BAWLROOM Strictly rehearsals axed as Kym Marsh has major panic attack & can't stop crying big buy Lorraine Kelly’s rarely-seen daughter Rosie buys first home to ‘do up’ for HUGE sum In fact, viewers were very impressed by the thrifty Rimmers and celebrated their job well done as the finished house finally made it to our screens. “£550,000 for all of that, that sounds money much better spent than some of the other Grand Designs that have been show,” one viewer wrote. Another added: “Gorgeous home, this family are grafters hope they enjoy it....” Read More on The Sun CHOC SWAP Celebrations makes major change to tubs - and it will divide all chocolate fans THAT’S A WRAP Proud Mum shows off epic Christmas gift haul with bargains from B&M & Tesco While a third said: “So good to see decent, hard-working, down-to-earth people on #granddesigns - bless them, and their lovely home.” “Another brilliant idea and build that looks stunning,” added a fourth. “The fella is a workaholic.” Grand Designs airs Wednesdays at 9pm on Channel 4. The house is 'upside down' allowing for a balcony over their bedroom, attached to their kitchen The decadent staircases were last seen unfinished and in need of sprucing up