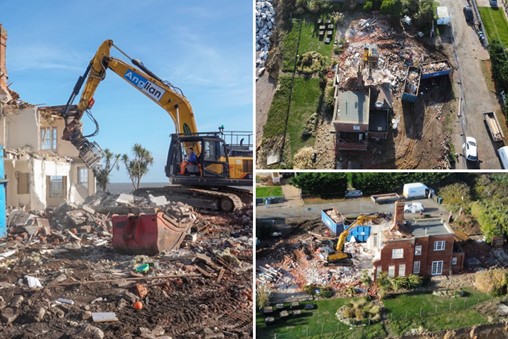 CONTRACTORS are halfway through the demolition of a £2million clifftop holiday home, which was in danger of falling into the sea. Heartbroken couple Richard and Sheila Moore were told to demolish their home in Thorpeness, Suffolk because it sits too close to dangerous coastal erosion. The huge holiday home is in danger of falling in the sea so owners have been forced to rip it downCredit: East Anglia News Service The Red House is being demolished after being ruled unsafe to live in The 1920s property was at risk of tumbling over a 35ft cliff due to coastal erosion Council officials informed the devastated pair that their six bedroom property, called The Red House, was unsafe to live in and had to be knocked down before it plunged off a 35ft cliff. The power of the ocean washed away at least 50ft of their back garden over the last 20 months, leaving the house perilously close to the cliff edge. The lovely 1920s property boasts stunning sea views and would be worth £2million if not for the erosion making it worthless. Local residents now fear that their homes will be next, either through demolition or being swept into the North Sea, unless up to £6million is spent on new sea defences. READ MORE PROPERTY STORIES TRICKS & MORTAR I'm a property expert - here's how to spot a cowboy builder a mile away ON THE STREET My family-of-5 is being evicted…the landlord offered us a flat it's £1k more The Moores' neighbours Matthew Graham and Lucy Ansbro have created their own "rock armour" sea defences out of 500 giant rocks to protect their home. Ms Ansbro said that the erosion had "happened much faster than anyone thought" it would. She added: "If I had not put those rocks down, we would not be living there now. Most of our house is nearer the sea than the Red House and the cliff would be down the middle of our garden." Meanwhile, Eric Atkinson, a local councillor, said: "People are obviously concerned about seeing the Red House going. Most read in Money BILL HELP Millions of Brits to get extra £300 cost of living cash boost from TODAY PAY DAY Millions to get £300 cost of living payment direct to bank account from this month HARD TIMES Made.com on edge of collapse as it reveals administrators are being called in HOT OR NOT? We tested hot water bottles... and the winner was better than Boots "Everyone wants to see a proper design for sea defences in place with the preferred option being rocks – but our understanding is that there is little public money available and it will have to be raised some other way. "While rocks are not the most attractive things, the beauty of having them as defences is that they can be moved around to where they are most needed." Mr and Mrs Moore have reportedly owned The Red House for over 20 years and are said to be "heartbroken" over its loss. Read More on The Sun LET SLEEPING DOGS LIE We turned our pet dog into ornamental rug for our living room OH BABY I’m 22, a mum-of-three AND now I’m pregnant with twins - people think I’m mad Demolition work began two weeks ago and is making good progress. A spokeswoman for the Coastal Partnership East, which represents local councils to manage the coastline in Norfolk and Suffolk, said that it was "working with the worst affected communities and other government agencies to explore what options are available now and to create new options for communities as our coast faces increasing challenges from a changing climate." Demolition work began two weeks ago and is about half finished