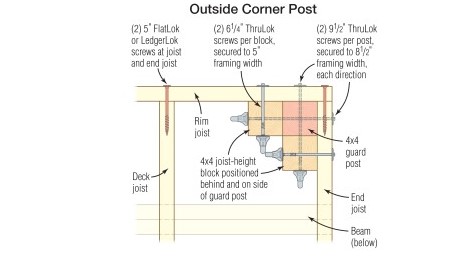 I can’t count the number of different ways I’ve fastened guard posts to deck framing. But I started paying a lot more attention to this important detail in 2005, when Virginia Tech researchers Frank Woeste and Joe Loferski and their team tested common post connection details used by deck builders (see “Strong Rail-Post Connections for Wooden Decks,” JLC, Feb/05). What they found is that most commonly used post connection details would not pass the minimum code requirement of a 200-pound load (plus a 2.5x safety factor to account for variations in field installation and degradation of the connections due to time and exposure to the elements). To strengthen this joint, the team devised and tested guard-post-to-frame connections using metal hardware that transferred outward force on the posts to the joists. After reading their article, I started using their tested connections right away. My decision to adopt tested assemblies using hardware instead of going with my carpenter’s notion of a strong connection was reinforced a few years later when I visited a deck we had built before that guard-post article was published. The owner asked me to look at the railing on his deck, which had been hit by a falling tree. Aside from the damage caused by the tree’s impact, I noticed that most of the 17 guard posts that we had carefully installed only seven years earlier now wobbled and deflected several inches with just a moderate push. Yikes! Still, other than the 200-lb. load requirement, the 2000 through 2018 versions of the International Residential Code didn’t offer any guidance on guardrail-post fastening. Construction details were left to deck builders to design and assemble, and to code officials to approve or disapprove. That has changed in the 2021 IRC, which has a new section, “R507.10 Exterior guards,” that provides more guidance on the guard-post-to-frame attachment (see “Guards, Handrails, and the 2021 IRC,” by Glenn Mathewson, JLC, Nov/Dec/21). In this article, I’ll explain two basic approaches to fastening posts to the deck framing and dive deeper into the “structural screw and block” approach that will satisfy the new code requirements. Most jurisdictions haven’t adopted the 2021 IRC yet, so now is a good time to prepare, by trying out different approaches for guardrail post connections that will comply with the new code section and seeing which construction details work best for you and your crew. Read More