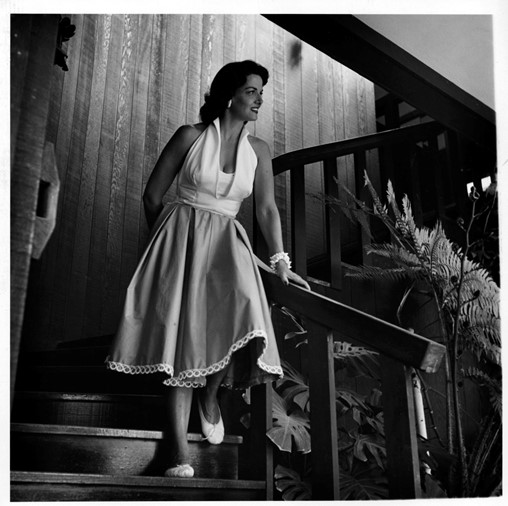 In the 1940s and ’50s, actress Jane Russell was primarily known as one of Hollywood’s leading bombshells. Many know her best from her performance as showgirl Dorothy Shaw in Gentlemen Prefer Blondes, a film that catapulted costar Marilyn Monroe to even greater fame. And while Russell’s successful career in films and music may have been her primary job, she also harbored a deep passion for other creative endeavors including architecture and interior design. In fact, as author Christina Rice details in her new book Mean…Moody…Magnificent!: Jane Russell and the Marketing of a Hollywood Legend, Russell not only helped to craft her own manse in L.A.’s Sherman Oaks neighborhood in partnership with noted architect Kemper Nomland Jr. but also was instrumental in the architecture and interior design of an entire apartment building in Panorama City, a neighborhood in outer Los Angeles. “Her off-screen image was such a juxtaposition to how she was promoted on-screen,” Rice says. While Russell’s film roles often had her playing the vixen, in her personal life she was deeply spiritual, a longtime advocate for adoption, and a thoughtful connoisseur of design. Although the actress herself did not possess an architecture degree, she touched seemingly every aspect of her Sherman Oaks residence, from choosing a site with a postcard-perfect view of the San Fernando Valley to instructing Nomland to fashion a home where every room was able to be entered from the central foyer rather than through the living room. Unfortunately, the home is no longer extant and there are few photographs of this unique entry area. But from interviews with Russell and Nomland, it seems the result was a stunning redwood staircase off the front entrance that led to a central tunnel of sorts; other rooms were accessed through this unique architectural element. The midcentury-modern home also featured two dressing rooms where Russell herself painted murals on the walls, a living and dining area that could easily accommodate 100 guests, and one giant cabinet in the kitchen. “The single storage space was a feature Jane devised herself; she deemed it more efficient than multiple cabinets throughout the area,” Rice notes in the book. Discover AD PRO The ultimate resource for design industry professionals, brought to you by the editors of Architectural Digest Similar Russellian innovations are found in the Taos West apartment complex, which she helped to design in the 1970s. To wit: There are no windows on the side of the building facing busy Woodman Avenue. “She thought, If you’re inside, do you really want to be looking over this really busy thoroughfare?” says Rice. Russell also insisted on individual patios and apartments that could be entered via the carport: “She lived there briefly, so I think she wanted to have as much privacy as possible,” notes Rice. Unlike her estate, this complex is still standing. “Anytime I’m in the area, I drive past and wave,” Rice says. As for Russell’s design style? While it changed over time—her home had a heavy Asian influence, whereas Taos West is more Southwestern in feel—one theme remained: “She’s not subtle, that’s for sure,” Rice says. “Her personality wasn’t subtle and her design style reflected that as well.”