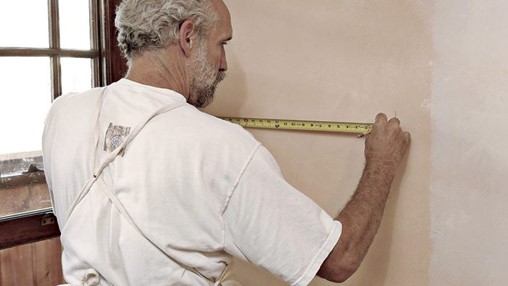 You need to see how level, plumb, and straight your walls are, and decide where your pattern will start and end, for a wallcovering installation to look its best. Before ordering materials, check that walls are plumb and woodwork is plumb and level. Use a long, straight board or a 4-ft. spirit level to check walls for bumps or dips, and mark them with a pencil so you can spot them easily later. You can hang almost any wallcovering type or pattern, but if door or window casings are markedly out of plumb, small patterns make this less obvious than large, loud patterns. Starting and finishing points The starting point for the first strip of wallpaper is determined by the desired finishing point for the last strip. This last strip almost always needs to be cut to fit, disrupting the strip’s full-width pattern. So, avoid hanging the last strip where it will be conspicuous. A common place to begin is one side of a main doorway. There, you won’t notice a narrower strip when you enter the room. And when you leave the room, you’ll usually be looking through the doorway. The last piece is often a small one placed over a doorway. Another common starting point is an inconspicuous corner. To determine exactly where wallpaper seams will occur, mark off intervals the same width as your wallpaper. Go around the room, using a ruler or a wrapped roll of wallpaper as your gauge. Try to avoid trimming and pasting very narrow strips of wallpaper in corners; this usually looks terrible, and the pieces don’t adhere well. You may want to move your starting point an inch or two to avoid that inconvenience. However, if the pattern is conspicuous, you might start layout with a strip centered in a conspicuous part of a wall—over a mantel, over a sofa, or in the middle of a large wall. Choose a visual focal point, and mark off roll-widths from each side of the starting strip until you have determined where the papering will end—preferably in an inconspicuous place. You may want to center the pattern at a window, if that’s the visual center of the room. With a picture window, the middle of the strip should align with the middle of the window. If there are two windows, the edges of two strips should meet along a centered, plumbed line between them unless the distance between the windows is less than the width of a strip. If the distance is less, center a strip between the windows.

Your password will be sent to your email address